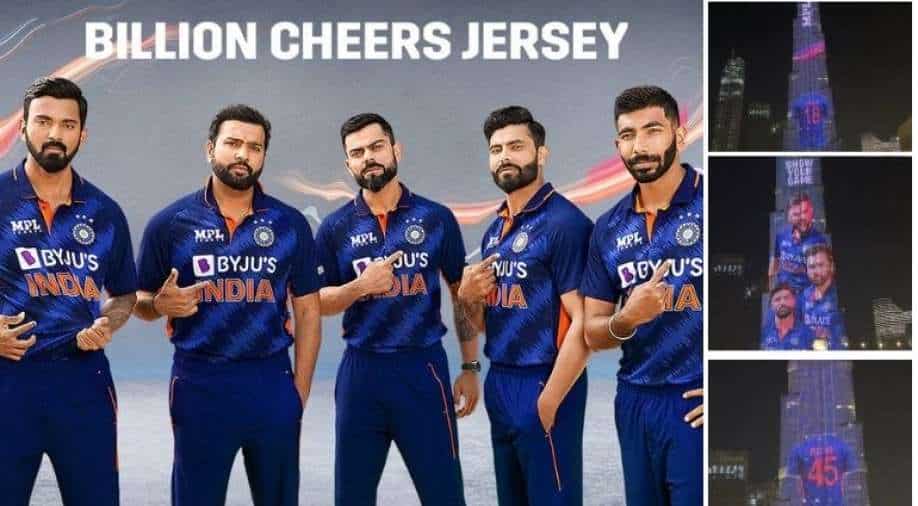 The unveiling of Virat Kohli-led Team India’s jersey for the T20 World Cup got bigger and better with a breathtaking light show at the Burj Khalifa in Dubai, which is one of the host cities for the tournament that will get underway from October 17.

On Wednesday (October 13), the Board of Control for Cricket in India (BCCI) unveiled the Indian team’s jersey, which is inspired by the fans and called the ‘Billion Cheers Jersey’. It comes in shades of prussian blue and royal blue.

“This is the first time in the history of Indian cricket that fans have been memorialised on a jersey. It carries their chants and cheers from iconic past matches, transformed into unique soundwave patterns,” stated a release from ML Sports.

Now, in a video posted on the official Twitter handle of BCCI, India’s new kit can be seen on Dubai’s iconic Burj Khalifa. “The Team India World Cup jersey unveil gets bigger and better with a projection on the iconic Burj Khalifa. Watch the historic moment here!” BCCI wrote as the caption.

The Men in Blue will kick off their T20 World Cup campaign against arch-rivals Pakistan on October 24 in Dubai. The tournament was scheduled to be held in India but the COVID-19 situation in the country forced organisers to shift it to the United Arab Emirates and Oman.

Ahead of the tournament, India tweaked its squad as Shardul Thakur has been added to the 15-member squad as he replaced Axar Patel, who will now be on the list of standby players.