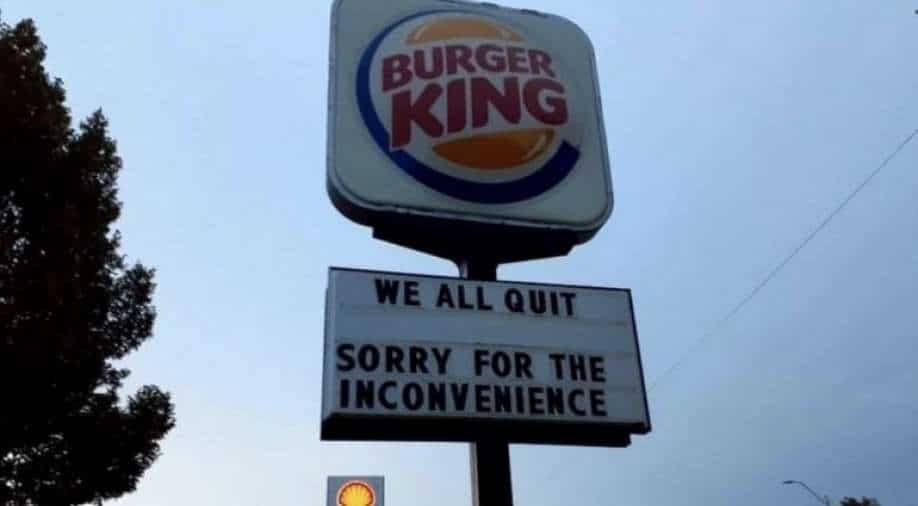 As hundreds of thousands of people around the world are struggling to get jobs in the coronavirus-affected economy, millions of Americans are quitting their jobs.

The latest Job Openings and Labor Turnover Survey (JOLTS) conducted by the US Labor Department has concluded that nearly 4.3 million Americans have quit their jobs in August.

This translates into 2.9 per cent of all workers in the country, which makes it the highest quitting rate recorded till now.

The report also shows that while millions of people are quitting jobs, the 7.7 million people who are unemployed are still not jumping in the queue to get these jobs.

This new figure had confused the analysts as many had expected unemployed people to quickly jump to job openings. Experts had also expected people to stick to their jobs to avoid getting fired and becoming unemployed in the Covid-stricken economy.

However, the US citizens do not want to go back to the under-paid, unsanitary, unsafe and ‘boring’ jobs. “[Employees] don’t want to return to backbreaking or boring, low wage, sh-t jobs,” Robert Reich, former U.S. Secretary of Labor in the Clinton Administration, told locals media house TIME. “Workers are burned out. They’re fed up. They’re fried. In the wake of so much hardship, and illness and death during the past year, they’re not going to take it anymore.”

Nearly 892,000 employees of the food sector and consumer-facing jobs called it quits form their jobs in the month of August, which was 157,000 more than July.

The food sector employees have faced extremely problematic long hours which did not translate into equal or fair pay. The stress and frustration caused by such long and repeated shifts led to a lot of people quitting, especially in the month of August.

This, some believe, is also because the social media-active generation has realised that they do not need to be at their toes all the time to make minimum wage. Experts believe it is the age where the economy is looking at few years of an employee’s market.

IPL 2021: Rishabh Pant doesn't 'have words to express' after 'unfortunate' loss against KKR in Qualifier 2