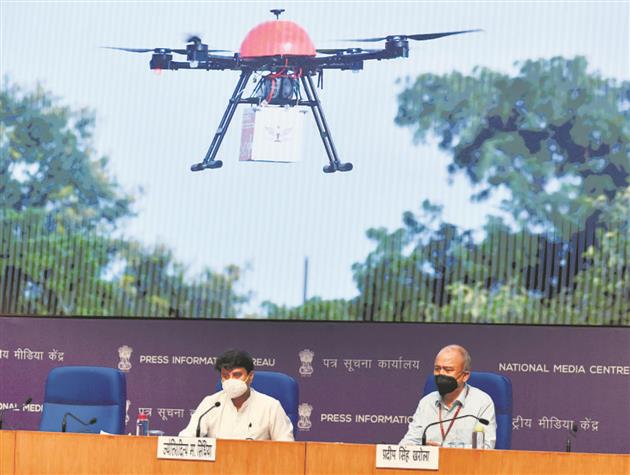 A day after the government announced Rs 120 crore production-linked incentive (PLI) scheme for the drone industry for three years, Minister of Civil Aviation Jyotiraditya Scindia today said the sector is poised to have a total turnover of up to Rs 15,000 crore by 2026.

The Rs120 crore production-linked incentive (PLI) scheme for the drone industry was announced on Wednesday.

The Union Cabinet chaired by PM Narendra Modi had yesterday approved a PLI scheme for drones and drone components with an allocation of Rs 120 crore spread over three financial years, which came as a follow-through of the liberalised Drone Rules, 2021, released by the Ministry of Civil Aviation on August 25.

The minister said the three parts of the entire value chain in the drone sector were hardware (drone manufacturer), software and service delivery. “If you combine turnover of all three parts of the drone sector, it is our estimate that by 2026, it will stand at USD 1.8 billion. This means that this industry will have a turnover of approximately Rs 12,000-Rs 15,000 crore by then,” he added. Under the PLI scheme, the incentive for a manufacturer of drones and drone components will be 20 per cent of the value addition made by the company during the next three years and it would be calculated on the basis of annual sales revenue from drones and drone components (net of GST) minus the purchase cost (net of GST) of drone and drone components.

Australians (back) at the IPL: David Warner and Steven Smith in spotlight ahead of T20 World Cup